Hawaii-based Christian Filipina dating site owner Milyn Christopher explains why Filipina women are popular with men from the US, Canada, Europe, Australia, and New Zealand. The Filipina women surveyed chose "faithful" and "Christian" as the top two attributes they seek in a husband. 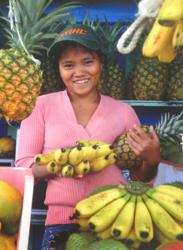 We love our families. Filipinas are adaptable to learn new languages and live in new places. We may not have as much formal education as men or women from other countries, but we are resourceful.

Adventurous yet faithful Christian men are a natural match in marriage for Filipina women. In a recentsurvey of Philippine women members, Christian Filipina uncovered the explanations for this natural match. Over sixty percent of respondents indicated an openness to living any place, including their own state/country or their spouse's state/country; being faithful to each other was cited as the most important factor to ensure a long-lasting marriage; over 70% felt they would like to be married within one year of getting to know a potential partner.

"Single Women from the Philippines are meeting men from Hawaii, California, Texas, Florida, British Colombia, Norway, Finland, United Kingdom, even New Zealand and Australia," said Hilo-based business owner Milyn Christopher. "As a Filipina myself, I value hard work, faithfulness, and a rural lifestyle. Happily, I found my match in my husband Peter, and we now have our own family in Hawaii. We have been fortunate to be able to help others find their soulmates as well, by starting Christian Filipina."

Mrs. Christopher, who along with her husband Peter Christopher also started Akaka Pitstop farm after moving to Hawaii's Big Island four years ago, said she had never considered the prospect of marrying someone from another nationality before her husband introduced himself to her in Dumaguete, Philippines. "Most Filipinas are very hard workers. We grew up working in the rice fields and also going to school. We love our families. Filipinas are adaptable to learn new languages and live in new places. We may not have as much formal education as men or women from other countries, but we are resourceful. We are entrepreneurial by necessity. Many of the Filipina members of our dating service have met self-employed husbands and work together with their husbands, like Peter and I do. Others have met men who are employed or retired, and started families in the gentlemans' countries, or in some cases, in the Philippines."

Filipinas are conservative when it comes to relationships, the recent Christian Filipina survey showed. Over 10% of surveyed singles indicating they had never been kissed, and less than 25% indicating they had ever kissed more than 2 people. Wealth and physical attractiveness, however, were not rated as the most important factors in choosing a potential marriage partner by the surveyed Filipinas, with less than 20% of surveyed citing "wealthy" or "physically attractive" as important. Being a movie star or millionaire are unnecessary, because the secret to happy marriage with a Filipina is being a trustworthy man dedicated to his wife and family.

However, Filipinas have their own set of requirements when evaluating potential partners. The least appealing trait rated by the Filipina women was smoking. Less than 2% of the respondents indicated they would consider a relationship with a person who is a smoker. With less than 1% of surveyed Filipinas indicating they smoke or drink regularly, 47% indicating Church would be a nice first date, and over 80% indicating their lifestyle as "Cooking and Cleaning", the reputation of Filipino women as dedicated and conservative family-builders continues to ring true. For men from cultures where more than 50% of couples get divorced, a family-focused Filipina can bring a needed grounding tendency to marriage.

"We started Christian Filipina because we felt there could be a respectful and friendly way for men and women to meet others with an interest in the Philippines. It has become even more successful than we had originally imagined. We now feature video testimonials on our Filipina YouTube channel, pictures of happily married Filipinas on our site, and every day we receive new testimonials of couples who are meeting and getting married."